Pedophilia In The Koran

Topic locked
Pedophilia in the Koran Nov 02, 2011
Might as well cut out the troll from the other discussion and look at what the Koran actually says about marriage and s.exual relations with prepubescent wives.

As we'll see, the Koran gives a waiting period for wives after a divorce if they have had sexual contact with their husbands.

Verse 33:49 says there is no waiting period if the husband and wife divorce without having s.ex during their marriage:

Koran 33:49 - O ye who believe! when you marry believing women and then divorce them before you have touched them, then you have no right to reckon the period of waiting with regard to them. So make some provision for them and send them away in a handsome manner.

As the Koran clearly says, waiting period (iddah) is only for divorced wives who have had s.exual contact with their husbands.

However, the Koran does stipulate a waiting period for pre-pubescent (premenstrual) wives. Not only does the Koran allow marriage to prepubescent girls, it seems to assume that husbands will have s.e.x with their preteen brides, since premenstrual wives are required to wait three months before they can marry again:

Koran 65:4 - And if you are in doubt as to the prescribed period for such of your women as have despaired of monthly courses, then know that the prescribed period for them is three months, and also for such as do not have their monthly courses yet. And as for those who are with child, their period shall be until they are delivered of their burden. And whoso fears ALLAH, HE will provide facilities for him in his affair.

Not only does the above passage sanction prepubescent marriage by discussing the rules of divorce for prepubescent wives, but pedophilia is also allowed since prepubescent wives are required to wait three months after a divorce - the waiting period is only for divorced wives who have s.exual contact with their husbands.

Re: Pedophilia In The Koran Nov 02, 2011
This is a Islamphobic argument that relies on a perverse interpretation of 65.4 - which is a verse about divorce.

When it comes to s.ex, Islam is quite clear - no s.ex outside marriage, no forced marriages and no paedophillia.

References to Quran, hadith and even scientific evidence in this video debunks the core loon theory eh desperately wants to believe.

Re: Pedophilia in the Koran Nov 02, 2011
If you're divorcing a prepubescent wife that means you were once married to her.

You can't be this dumb not to realize this, can you?

Verse 65:4 clearly talks about divorcing wives who have not yet menstruated.

That means prepubescent marriage is allowed.

V33:49 requires a waiting period for a divorce only when a husband has had s.exual relations with his former wife.

You can't be this retarded to not understand this?

Oh wait, you are.

Re: Pedophilia In The Koran Nov 02, 2011
You are totally reliant on a loon interpretation of 65.4. The video shows the clear verses and other evidence which correct your wrong interpretation and clearly show that Islam does not condone forced marriages, s.ex outside of marriage and paedophillia.

Of course, if you can't address the clear verses - you'll just have to resort to name calling instead, won't you?

Re: Pedophilia in the Koran Nov 02, 2011
I can't address any verses if you never present any. The video is a smoke screen since there are no verses presented in the video that "prohibit pedophilia".

If you don't want to be called a liar or troll, then just post the verses you claim prove pedophilia is not allowed.

The "name calling" was spot on. Your last set of comments were truly beyond stupid.

Only an idiot would not realize that you would have to be married if you're getting a divorce.

Re: Pedophilia In The Koran Nov 02, 2011
Watch the video, and then compare the evidence in it to your loon interpretation of 64.5.

If you have a specific problem with any piece of evidence, let me know.

Re: Pedophilia in the Koran Nov 02, 2011
Sure, provide the actual verse from the Koran you claim prohibits pedophilia.

We can compare this alleged verse to the verses in the Koran that clearly assume Muslim men will have s.ex with prepubescent wives.

Re: Pedophilia In The Koran Nov 02, 2011
The invitation is still there - evidence is in the video, and if you have a specific issue with any of the verses, Hadith or scientific material let me know and I'll tackle it.

It is clear that what loons 'clearly assume' is at odds with what the Quran actually says. But I'm glad that at least you're now acknowledging that it is an assumption on the part of loons (the usual loon logic hoops). That explains why you refuse to tackle the clear verses of the Quran referenced in the video.

Re: Pedophilia in the Koran Nov 03, 2011
Anyways, I'm not interested in your trolling.

The other thread is there for you to troll.

This thread is for actual discussion on the passages of pedophilia in the Koran, ie., for members who are less retarded than you to respond to my arguments.

Re: Pedophilia In The Koran Nov 03, 2011
I'm very interested in why you think a loon interpretation of one verse about divorce can be taken as 'proof' that Islam condones paedophillia.

Clear verses of the Quran show that Islam does not allow s.ex outside marriage, forced marriages or paedophillia etc. Only marital s.ex is allowed.

You seem to be resorting to name calling in lieu of any rational arguments these days. Interesting that.

I'm very interested in why you think a loon interpretation of one verse about divorce can be taken as 'proof' that Islam condones paedophillia.

Sorry, I can't debate a retard.

My explanation in the OP was not based on one verse. If you had some grey matter and basic reading comprehension you would have seen that I quoted two verses from the Koran. But thanks for once again showing what an outstanding moron you are.

One verse talks about divorce (and therefore marriage) and a waiting period for prepubescent wives, the other verse mentions that a waiting period is only required for wives if their husbands were s.exually active with them.

Re: Pedophilia In The Koran Nov 03, 2011
Your whole argument is based on a loon misinterpretation of one verse.

The Muslim view is based on the clear verses and evidence - all very well highlighted in the video.

Re: Pedophilia in the Koran Nov 13, 2011
Facts and stats about Islam and pedophelia speak otherwise Shaf, you are just totally wrong and in denial.
Last month in the UK, seven defendants appeared at Shrewsbury Crown Court for child $exual exploitation and child prostitution, they are:
Ahdel Ali
Mubarek Ali
Mohammed Ali Sultan
Noshad Hussain
Mohammed Younis
Mohammed Islam Choudhrey
Mahroof Khan
Although UK does not allow to mention the religion of the offenders, don't you think it is safe to say that they are ALL Muslims and read the same Kuran as you do.

Telford child $ex ring trials to run for over a year
http://www.shropshirestar.com/news/2011 ... er-a-year/

If you count the numbers of convicted paedophiles and paedophiles on the s.exual offenders register - you'll find that Muslims don't form the majority - not by a long, long way.

Are you going to argue that the fact that Catholicism is responsible for the paedophillia by Catholic priests?

At the end of the day, Muslims carrying out crimes that are against Islam don't make a convincing argument for the usual loon Islam-bashing.

Re: Pedophilia in the Koran Nov 15, 2011
You did not respond, are those 7 offenders Muslims?

Re: Pedophilia In The Koran Nov 15, 2011
I don't know all of the 1 billion plus Muslims in the world gertrude.

If the criminals say they are Muslilm, then they are Muslim as far as I am concerned - but I don't know them. Their crime is against Islam though.

Do you ask Catholics if the Paedophile priests are Christian?

Re: Pedophilia in the Koran Nov 15, 2011
But there is a big difference Shaf, under western laws pedophile priests are prosecuted, under sharia law Muslim pedophiles are not. Sharia law does not punish pedophelia, it condones it.

So you agree that these 7 $ex offenders are muslims, do you think this kind of immigrants is beneficial to the UK?

Re: Pedophilia In The Koran Nov 15, 2011
gertrude, what did I tell you about believing all those crazee loon websites you frequent.

I asked you whether you asked Catholics whether the paedo priests were Christian or not, not about whether they are prosecuted (or, for that matter, whether the church covers up the issues).

As for the 7 - I'm amused that you think I have any intimate knowledge of their religion. I know their crimes are against Islam.

Re: Pedophilia in the Koran Nov 15, 2011
With names like that, they don't sound Christians for sure.
It s like asking if Khrhysniakov , Yamamoto or Bhunnoo sound British.

Re: Pedophilia In The Koran Nov 16, 2011
gertrude you are embarrassing yourself.

I simply asked whether you would ask a Catholic whether paedo priests were Christian or not? Why the reluctance to answer??

As for people with Arabic names - I can think of quite a few who aren't Muslim. There's fellow Brit - Nizar-Ali (a CoE Bishop) and a long list of Arab Christians who have Arabic names.

But the big-thing-point is that even if the 7 (seven!) call themselves Muslims - they are still doing something against Islam.

Re: Pedophilia In The Koran Nov 30, 2011
Homosexuality in Islam is punishable by death but pederasty is permissible.
Quran 52:24 Round about them will serve, (devoted) to them, young male servants (handsome) as Pearls well-guarded. 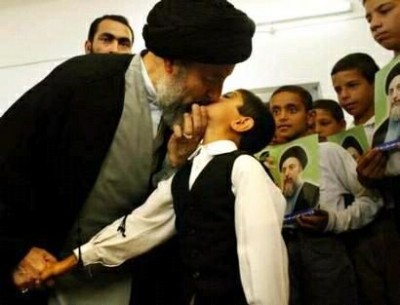 Re: Pedophilia In The Koran Nov 30, 2011
Another loon fantasy. Already addressed in the previous posts which show this is not the case.