Doves Of Ukraine Peace Were Attacked

Topic locked
Doves of Ukraine peace were attacked Apr 22, 2014
Do you believe in omens?

No sooner had the birds been set free in St Peter’s Square – as a symbolic gesture of peace for Ukraine – than they were set upon by a seagull and a crow.

The two larger birds swooped on the defenceless doves during the Pope’s weekly Sunday Angelus prayer in front of tens of thousands of worshippers gathered in the Vatican.
After saying a prayer for Ukraine, where at least three people were killed during the latest clashes that have seen Kiev in flames, the Pontiff helped schoolchildren release the doves from the window of the Apostolic Palace as a peace gesture.

But they were immediately attacked. The seagull pinned one of the doves against the wall of the palace and pecked at its tail, but was left with a mouthful of feathers as its victim made an escape.
The crow caught the smaller bird unawares, as it rested on a windowsill, before pecking at it repeatedly. Again, the victim managed to get away.
Eventually both doves flew off, seemingly uninjured, to the relief of tens of thousands of onlookers. 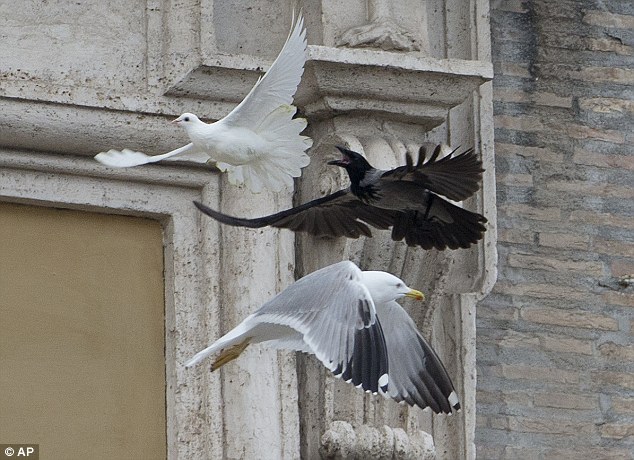